Sam Fankuchen, Founder & CEO
During crises and natural disasters, an effective governmental response is key to quickly activating essential volunteers. Decentralized access to opportunities, inefficient and fragmented volunteer management processes, and lack of transparent data and performance reporting are some of the many challenges governments face in enhancing constituent engagement.

Golden, the top ranked apps for community service and highly-awarded volunteer management system, is built to overcome these challenges. The idea of establishing the company stemmed from Founder and CEO Sam Fankuchen’s disappointing experience while searching for a suitable civic engagement opportunity during his high school years. After completing his career in software and corporate strategy, he founded Golden with a vision to enable any constituent or citizen in the U.S. or abroad to discover and live their golden moments through acts of service in any form, be it traditional in-person volunteering, virtual volunteering, disaster relief, neighbor-toneighbor, peer-to-peer, mutual aid support, or fundraising.

Golden prides itself on full compliance with every major privacy regulation in the U.S. and worldwide. From complying with location-specific requirements such as GDPR in Europe and CCPA in California to industry regulations such as HIPAA and even COPPA (online children privacy protection), Golden meets or exceeds the thresholds for responsible handling of personal information. These capabilities have led Golden to become a global award-winning software for managing any civic engagement program.

Golden has prioritized flexibility in its solution implementation, recognizing that government clients often have pre-existing system dependencies. For clients who have already partnered with a software implementation firm, Golden’s volunteer management system can be seamlessly integrated with the existing software. The company is also a premier Salesforce and Microsoft Dynamics partner.

This collaborative approach allows Golden to deliver its solution worldwide in both the government and private sectors.

Deployment time is minimal because Golden is a turnkey solution. Available both on iOS and Android as well as on the web, Golden can reach any person on any device or operating system, anywhere in the world. Not only are Golden’s clients able to conduct frictionless signups and live background checks to seamlessly fill volunteer ranks, but they can also gain visibility into their program performance in real-time to identify and track key trends such as value creation and donor penetration.


Fankuchen says, “We’ve handled the most demanding use cases in the world for public sector clients, whether that’s Hurricane Harvey recovery efforts or COVID relief efforts. We make dreams a reality for anybody motivated to put technology in front of their constituents.” In the aftermath of Hurricane Harvey in 2017, Golden helped the City of Houston quickly activate volunteers across a network of nonprofit, government, and community partners, and tracked and disseminated impact data between traditional civic engagement activities and disaster relief activities. Disaster relief activities were tracked according to skilled labor level and reimbursable rates to be submitted to FEMA.

With innovation at its core, Golden has earned top honors from the Bill and Melinda Gates Foundation, winning the Reimagine Charitable Giving Challenge. Not only has Golden twice been named a ‘World changing Idea’ by Fast Company magazine, but they are also the only private sector company to testify before the National Commission on Military, National, and Public Service about the future of civic engagement in the U.S. 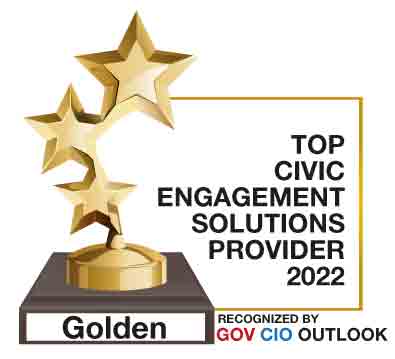 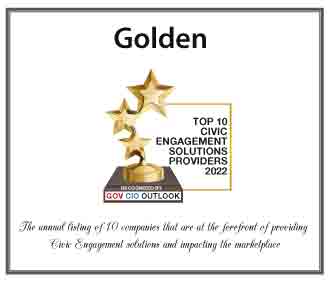 Description
Golden enables any constituent or citizen in the U.S. or abroad to discover and live in their golden moments through acts of service in any form.