Robert Bjarnason, CEO and President of Citizens Foundation Iceland
Remember when the Great Recession wreaked havoc worldwide, and Iceland plunged into a meltdown of volcanic proportions? The country that was once thriving, witnessing an unprecedented boom led by its top three financial institutions, quickly fell prey to the financial debacle of 2008. People lost faith in the Icelandic parliament, which is revered as one of the oldest parliaments in the world, founded in c. 930. It was not only crucial for Iceland to rise from the wreckage of the crisis, but also to restore the faith of the people in the government.

The idea to establish Citizens Foundation found its roots in this very purpose.

Beginning its journey in Iceland in 2008, Citizens Foundation, founded by Robert Bjarnason and Gunnar Grímsson, serves as a nonprofit with a mission to connect governments and citizens by creating open-source, state-of-the-art engagement platforms. The U.S. office, Citizens Foundation America, co-founded by Joshua Lanthier-Welch, a 501(c)(3) sub-section 509(a)(2) public charity, was established in 2019. Together they offer consultation and support on how to best plan, promote, execute, and sustain successful citizen engagement projects.

Partnering with Reykjavik City, State of New Jersey, Scottish Parliament, and World Bank, Citizens Foundation has supported civic engagement activities in thousands of projects worldwide, offering a mature open source social deliberation platform, in continuous development for the last 14 years, used by over 25 countries, states and municipalities all over the world. It stands out for being trusted, flexible, feature-loaded, road-tested; for such a small operation, they offer the impressive combination of breadth, reach, stability, and proven track record.

“We started Citizens Foundation with the aim to use internet tools and web technologies to help connect governments to their citizens, deploying civic engagement mechanisms that would empower the people to assist the government in making better decisions in an ever more complex world,” says Robert Bjarnason, CEO and President of Citizens Foundation.

Citizens Foundation’s idea generation and deliberation platform, Your Priorities, brings people together to prioritize and contribute innovative ideas that can effectively improve communities.


Through its non-toxic method of deliberative debate, Your Priorities addresses the growing issue of polarization on social media platforms and helps approach societal issues through collective spirit.

Citizens can present their ideas on a subject and vote up/down on a particular topic. However, they cannot comment directly on a point they dislike, but may counter with a standalone statement that can also be voted on by other participants. This further promotes Citizens Foundation’s notion of non-toxic debating. Even a topic as sensitive as the use of the Bible in public schools in Iceland had nearly zero toxicity when moderated on the platform. Your Priorities’ AI natural language processing tools automatically detect and notify community administrators of toxic content. They also help governments make sense of the consultation and the feedback from the citizens on various initiatives like policy crowdsourcing and participatory budgeting. To reach out to maximum users, Your Priorities is designed with a mobile-first approach. The platform allows governments to customize their engagement projects to be welcoming, friendly, and simple.

Your Priorities has been instrumental in driving the success of Citizens Foundation’s first project, Better Reykjavik, co-created in collaboration with Reykjavik and its citizens in 2010. For more than a decade, the project has enabled the government to identify the ways to best spend the taxpayers’ money, restore faith in democracy, and make the citizens a part of the democratic process.


“Better Reykjavik stands as an example of a sustainable civil society effort that has institutionalized the practice of good governance in the city,” says Joshua Lanthier-Welch, Executive Director, Citizens Foundation America. The project has more than 30,000 registered users who have submitted over 10,000 ideas.

Today, 18 municipalities in Iceland leverage Citizens Foundation’s solutions to engage their citizens, covering nearly 90 percent of the population. The cultural idea of civic engagement has not only taken off in Reykjavik but in more than 25 other countries, including Scotland, Austria, and the U.S. Their most recent U.S. project features partnering with GovLab in a City Challenge, calling on the constituents of the city of Oakland, California to innovate solutions for their toughest urban problems.

For the future, Citizens Foundation is determined to work with more governments and help them set up civic engagement projects. The nonprofit is constantly adding more AI features to its platform, specifically designed to empower citizens in a democratic way. 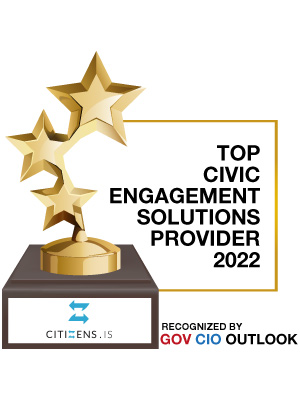 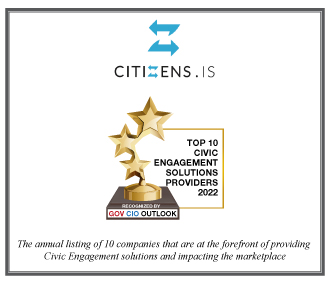 Description
Citizens Foundation is a nonprofit governed by the mission to connect governments and citizens by creating open-source, state-of-the-art engagement platforms