Steve Olsen, Founder and President
The ongoing coronavirus pandemic is set to change the way millions of Americans vote in November. States are expanding access to mail-in- voting as a safer alternative to in-person voting. Likewise, election officials across the US are also preparing for a surge in mail-in-ballots this fall to ensure that every eligible citizen can vote safely and successfully at the same time. Yet there remain some concernsas vote-by-mail is always being questioned of increasing the chances of electoral fraud, ballot security and postal service delays. Against these unproven scenarios, Colorado-based Ballottrax offers the world’s first complete mail ballot locator and notification system. It is a patent-pending solution that tracks the status of every mail-in ballot. It sends a series of proactive alerts to voters notifying them where their ballot is in the election process, right from the moment of being printed to being accepted. Thus providing absolute peace of mind to voters as they are assured their vote remains private and has been counted as well. The system is the first ballot tracking tool out there and the only complete system that tracks a ballot’s entire life cycle supporting 14 different languages.

By integrating with State or County election offices, print vendors, and USPS, Ballottrax knows when a ballot has been printed and mailed to a voter, returned from a voter, received by the election office, and accepted or rejected for counting as well. Their data-driven processes provide real-time, comprehensible reports to help run a better election and reduce administrative costs through better forecasting and planning. “Combining voter registration data with postal service tracking data of states and election offices, Ballottrax seamlessly tracks all the ballots through the entire postal stream,” states that Steve Olsen, Founder, and President of Ballottrax. Depending on their preference to receive notifications via text, email, or voice alert and their own do-not-disturb times, Ballottrax lets voters know where their ballotsare in real-time. With their proactive customizable notification system, they ensure one stays informed about upcoming elections and general election information, so they never miss an opportunity for their voice to be heard. Another significant occurrence is that sometimes voters prefer not to send their valuable vote into the postal stream due to security concerns. In that case, Ballottrax can alert voters if they decide not to return the ballot into the mail stream. Ballottrax can send them a notice to drop it in a drop-box and provide a list of drop-boxes for a voter to put their ballot in. Ballottrax can also alert voters that have surrendered their ballot and voted in person. This unique tracking and communication system paves the way for visibilities that a voter didn’t have before. As a result, this boosts voter confidence and, subsequently, the turn-out in the vote-by-mail process.

Additionally, the election office gains complete visibility as well. Since Ballottrax tracks all the mail ballots within the election, the officials can view them on a simple dashboard screen where the ballots are at each stage. It helps to plan the resources of volunteers and election workers accordingly. It also alleviates them from communicating with voters on and often and attending unnecessary phone calls about customers enquiring about their ballot as Ballottrax continually sends proactive notifications to inform the voter where their ballot is before they ever ask. Consequently, it frees up the election offices and saves them a lot of money and time trying to run an election.

Once the counties are trained on the system, they can control everything about the system. “For large sized counties, we extract data files directly from the state voter registration system to be aware of voters who are actually eligible, and then use that data to request the voter sign in and register for the opted in messaging,” asserts Steve. On the other hand, counties that do not fall under the purview of states they have a state-wide contract for, Ballottrax just makes an arrangement with them to get the data from the county’s voter system to process the appropriate notifications to the voters. Be it large counties like Los Angeles, or down to the counties with just more than a couple of thousand voters, Ballottrax can effortlessly synchronize with all of them.

The unrivaled comprehensibility and flexibility of Ballottrax have helped a surfeit of customers overcome all pre-existing challenges in conducting an election. When one of the counties adopted vote-by-mail, its employees were getting an excess of incoming calls from one in four voters questioning their ballot status. After Ballottrax implemented its system, the call rate for that election office went down to 1 in 20 voters resulting in a 500 percent decrease in the number of incoming phone calls for further managing and communicating with those voters. They also concluded from the combined data from their system and dashboard that voter turn-out goes up between 20-40 percent for voters who use the ballot tracking system.

“One of our customers in Oregon suggested us to include data down to the zip code level of where the ballots might be at every stage. Henceforth, we decided to include the suggestion and are now able to provide the status of their ballots in each zip code. Whether it has been mailed, received, accepted, or rejected,” states Steve, affirming their highly flexible attitude in adhering to customers’ demands.

After operating almost 300 elections through their system, Ballottrax now plans to continue to invest in the technology to help make elections better. They are planning further to add unique enhancements to dive deeper into details, hence providing the voter with more information and up-to-the-minute notifications to increase their faith in the vote-by-mail. “We are spending plenty of time with the department of homeland security to ensure everything we do is compliant with their protocols. It is not only the counties and election officials but also for the voters to make sure their information is secured,” avows Steve. 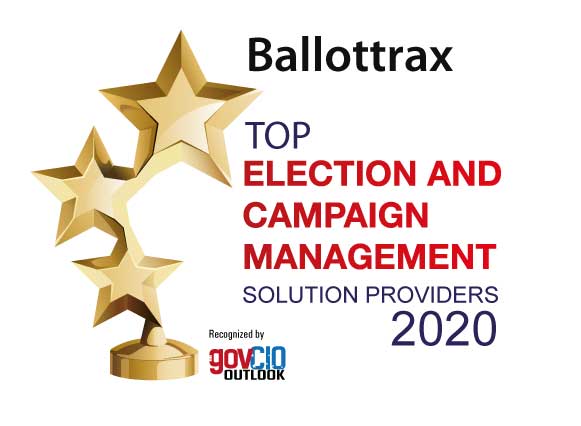 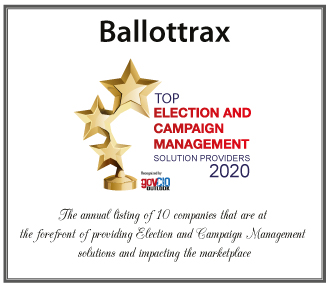 Description
Ballottrax offers the world’s first complete mail ballot locator and notification system. It is a patent-pending solution that tracks the status of every mail-in ballot. It sends a series of proactive alerts to voters notifying them where their ballot is in the election process, right from the moment of being printed to being accepted. Adjacently, the election office gains complete visibility as well. The officials can view on a simple dashboard screen where the ballots are at each stage, which helps them in planning and coordinating between the resources of volunteers and election workers accordingly