Ivo Allen, Founder and CEO Nearly five years ago, an episode of NBC’s weekly television show, Dateline on a school shooting left Ivo Allen and his wife completely baffled. According to the show, 80 percent of the fatalities in the shooting happened from non-life-threatening gunshot wounds. Allen, who was then working as a government contractor with schools and police departments, decided to dig deeper and discern the cause for such heavy casualties. After speaking to several police departments, he learned a bitter truth—the technology needed to provide police and first responders with better situational awareness simply didn’t exist. Several lives could’ve been saved if the building personnel and police had been equipped with better situational awareness and the means to respond faster. “It was a catalyst for me to develop 911inform, an all-encompassing emergency system that empowers police officers and first responders with the right resources to tackle emergencies and crises,” says Allen, Founder and CEO of 911inform. After years of testing and development based on inputs from thousands of police departments, schools, and universities, Allen launched 911inform in 2020.

Today, 911inform is the only notification and emergency management solution that provides 911 dispatch, law enforcement, fire and rescue services, medical service providers, and key building personnel with the tools to effectively mitigate any emergency situation. Acting as an overlying layer to augment the existing 911 system, 911inform facilitates faster response to an emergency, including active shootings and daily Emergency Medical Services (EMS), while providing command and control to the police. The platform has many features, including the ability to provide emergency response teams with the bi-directional communication and controls needed to successfully manage a crisis and save valuable time. With its robust capabilities, 911inform caters to a wide range of clients, including educational institutions, enterprise buildings, medical facilities, public venues, resorts, state, local, and federal governments, and sporting events & concert venues.

During the pilot implementation of the 911inform platform at three schools, Allen was joined by Jody GrandPre, a proven sales leader with over 18 years of experience. Overwhelmed by the schools’ response, GrandPre was convinced that 911inform would be a breakthrough technology for school districts, medical facilities, and other building owners, as well as first responders and emergency services. Without further ado, he joined Allen in his new venture as the COO of 911inform to manage the sales and operations and establish sales channels. “The thought leadership here at 911inform is miles ahead of our competitors, making our product stand out in the marketplace,” says GrandPre.

Multiple Technologies Under One Roof

While the majority of technology in the market today is reactionary, 911inform was built to expedite the handling of emergencies and provide key building personnel and first responders with real-time, actionable data in a single pane of glass. Building owners often need to partner with multiple vendors for different Internet of Things (IoT) technologies, such as gunshot detection, HVAC systems, door access solutions, cameras, strobe lights, and more when it comes to crisis handling. For instance, a school district or a government facility that purchases multiple technologies for facial recognition, weapon detection, and panic buttons from different vendors often needs to operate different interfaces for each function.

The thought leadership here at 911inform is miles ahead of our competitors, making our product stand out in the marketplace

911inform simplifies this by integrating all technologies into one platform. “While the majority of our competitors are niche players, we combat all the challenges around integration and provide first responders with complete visibility into a building during an emergency,” says GrandPre.

In parallel, the increased usage of IoT devices has led to a significant rise in the volume of data generated from multiple sources, leaving first responders inundated with information. 911inform filters out the IoT noise and provides response teams with the relevant information to handle an emergency. “By bringing together all tools under one umbrella, we provide users with one throat to choke and manage the entire situation through a single interface,” notes Allen. 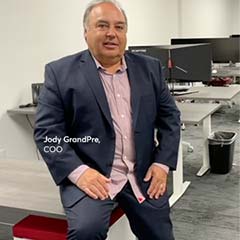 Building owners also face a grueling challenge of installing multiple software packages with different standard operating procedures (SOP). 911inform resolves this problem with a platform compatible with the existing equipment in the building. The platform allows users to integrate new technologies into the software as simple add-ons. “On adding new technologies, the user interface remains the same and all incoming data points are integrated into the existing SOP for handling an emergency. This makes it easier for companies to add new technologies and life saving features to buildings,” says Allen.

Responding to Emergencies in a Streamlined Way

From counting the number of people in a building during an emergency to notifying them that the premises will be closed for specific reasons, 911inform equips first responders and key building personnel to tackle every scenario that may arise during a crisis. The solution can instantly notify key building personnel if an emergency call is placed within the geo-mapped building location. It also provides building owners with the location of the emergency, along with admin controls to decide who gets notified—it might be the medical team or building security, depending on the situation. In addition, the platform also establishes a direct line of communication between building faculty, police dispatch, and first responders. Unlike most software in the market that connects the police with auto attendants, 911inform enables police to directly communicate with the person who made the emergency call and monitor the emergency location. However, the technology will remain dormant until there is an emergency, ensuring that the police have access to live feed from the cameras only during an emergency. The solution is fully customizable to meet the client’s security and emergency response needs and integrates with the existing emergency response protocols.

On the other hand, the platform provides first responders with the ability to page inside the building, lock the building down, turn off the lights, close blinds, and notify all personnel with the touch of a button. 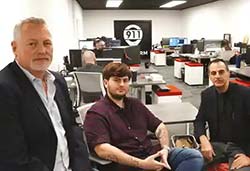 “Despite being trained for emergencies such as school shootings, on-site personnel often fail to put their skills to practice in the moment of crisis. From my discussions with police departments, we learned that roughly 10 percent of the on-site personnel follow procedures,” shares Allen. 911inform’s software addresses this challenge by taking into account the “human factor” and automatically performing actionable, time-consuming processes to help first responders and on-site personnel. The platform ensures that all processes and procedures are executed during an emergency.

911inform’s zeal to serve its clients in the best possible way is evident from the very first interaction. The company begins with a due diligence period to collect all the data relevant to the customer and their location. The next step involves gathering the SOPs for all emergencies and documenting them. The company then programs a gateway that goes on-site and connects the building to the police department during an emergency. Once the setup is complete, 911inform conducts a trial by going through all the procedures with building owners and the police to iron out any issues. Depending on the size of the building, 911inform requires approximately 60-90 days to complete a project.

While working with a school district in New Jersey, 911inform displayed its prowess in handling an emergency. A school teacher dialed 911 from the classroom phone seeking help for a student having a seizure. With over 13 different schools under the district, all the phone lines were routed through one central location. When the 911 call was made, the carrier substituted the billing telephone number (BTN) as the point of emergency, which was five miles away from the exact location of the crisis. However, 911inform was able to automatically provide the accurate location of the incident to the concerned authorities. “To save time, we routed the police to door 13, which was 20 feet away from the classroom where the incident took place. In this scenario, we were able to help save 10-15 minutes of valuable time,” notes Allen.

911inform’s software is compliant with federal laws such as the Ray Baum’s Act which ensures that a dispatchable location is conveyed with 911 calls to dispatch centers. Being compliant with both federal and state laws ensures that users need not purchase separate software packages to comply with the various regulations. The company also adheres to Alyssa’s Law, now in effect in Florida and New Jersey, which requires schools to be equipped with ‘panic buttons’ to provide critical situational awareness and directly notify law enforcement in the event of an emergency.

Since its national launch in March of last year, 911inform has grown exponentially with an overwhelming response from customers, establishing partnerships with several large-scale clients, including Fortune 100 companies. With no intentions to rest on its laurels, 911inform continues to develop and test new ways to help the police and first responders during an emergency. Focused on innovating and leading the market with the latest technology, the company recently built a new R&D center in New Jersey. 911inform has several new products and features in the pipeline and aims to be a game-changer when it comes to handling a crisis. 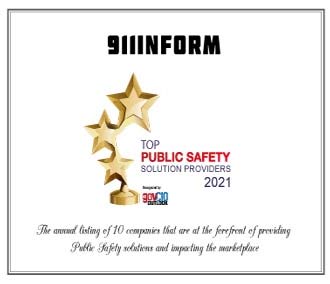 Description
911inform is the only notification and emergency management solution that provides police dispatch, first-responders, and key building personnel with the tools to mitigate any emergency effectively. Acting as an overlying layer to augment the existing 911 system, 911inform facilitates faster response to an emergency, including active shootings and daily Emergency Medical Services (EMS), while providing command and control to the police. The platform has many features, including the ability to provide emergency response teams with the bi-directional communication and controls needed to successfully manage a crisis and save valuable time